God of War Ragnarök has slightly changed how skills work and for the better. It might take you some time to get the hang of it, though.

God of War Ragnarök has many of the things that were available for Kratos and Atreus, but a lot has changed. There are specific skills that will make a huge difference when you are getting started.

For that reason, we decided to make a guide to help choose the best early skills in God of War Ragnarök.

The Best Skills To Upgrade Early

Some skills make your fights much easier, and you should consider using them if you are having trouble with early enemies.

Some skills straight up make enemies not a threat in the right situations. Others will help your increase overall damage output.

Please note that although these skills are recommended for being effective and practical, you should always go with what is most comfortable and fun for you.

That said, these are our recommended skills to use early and why.

By far one of Kratos’ most fun skills, Serpent’s Snare allows you to tactically control the battlefield.

Hold R2 for a brutal Leviathan Axe attack that throws the enemy to apply massive damage. Weaker foes are thrown to create an explosion of Frost on impact that launches other nearby enemies.

Not only that, but Serpent’s Snare is also valuable for throwing enemies out of arenas. The fun of throwing an enemy in bottomless pits is usually criminally underrated. Few things are as fun as feeling like you tricked the game into ending an enemy’s life bar for you.

This move will also synergize tremendously with Vaporise Frost, as you will see below.

Although bigger and stronger enemies cannot be thrown by Serpent’s Snare, the attack can stagger the target and inflict frost.

Since it doesn’t become useless during those sites, it might be good for you to use it.

Aim and press R2 during Frost Awaken to throw the Leviathan Axe with extreme force, knocking the target backward. Frozen Lance deals very high damage and frost, and can break an enemy’s guard.

This skill does it all. It works to deal damage, crow control, and break shields. It’s a very all-rounder ability you can rely on throughout the game.

In order to unlock it, you must first get your Leviathan Axe to level 3. That can be done once you beat a boss in Álfheim. You will find that boss naturally by following the main storyline.

Probably not as good as Frozen Lance, but still decent.

Press R2 during Frost Awaken to slash upwards with a chilling wave to launch enemies in an area and apply high frost.

Since Heavy Ascent allows you to juggle your enemies after you knock them up, this means that it is a fairly decent way to crowd control.

As a combo extender, Heavy Ascent is also an excellent way to increase Kratos’ damage-dealing potential. I’d instead go straight to Frozen Lance, but Heavy Ascent is not a bad option.

One of the most important skills in the game, Vaporise Frost, makes the battles more dynamic and significantly increases your damage output with the Blades of Chaos.

That means you will generally start your fights with the Leviathan Axe and use Frozen Lance or Heavy Accent. But, as soon as your enemy is frosted, switch to the Blades of Chaos for even more damage.

Once the status is no longer affecting your enemy, switch back to the Leviathan Axe and repeat.

Much like Vaporise Frost, Extinguish Flame is an essential early skill to keep your damage output high in God of War Ragnarök.

It increases your melee damage with the Leviathan Axe when the enemies are burning.

I’m sure you have now figured out how to keep your damage high using Extinguish Flame and Vaporise Frost. Use the Blades of Chaos to burn enemies, then switch to the Leviathan Axe for the extra damage.

Once the enemy is no longer burning, wait for it to be frosted and switch back to the Blades of Chaos.

Level Up Your Skills

By using skills a number of times, you will get a gold badge that allows you to add a mod token to your skill.

These mod tokens slightly buff your skills by adding damage, stun, strengthening your elemental effects, or something else.

Each skill provides different token mod options, which helps you fine-tune Kratos to your own playstyle. It also makes each playthrough different since you can use different builds.

This skill system is a clear evolution and just one of the things that are so well done in this game. The game wants you to explore all the different skills and rewards you for using them.

This level of polish shows why God of War is above many other games on the market. Although there are games like God of War out there, it is fair to say that none really compare to Krato’s saga.

Keep in mind that all new skills that you unlock can evolve and help you express yourself the way you want with Kratos’ abilities.

Eventually, you will have a fine-tuned Kratos with skills and equipment that suit the way you like to play the most, and this shows a lot of dedication from developers. 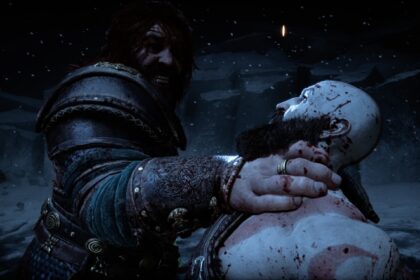