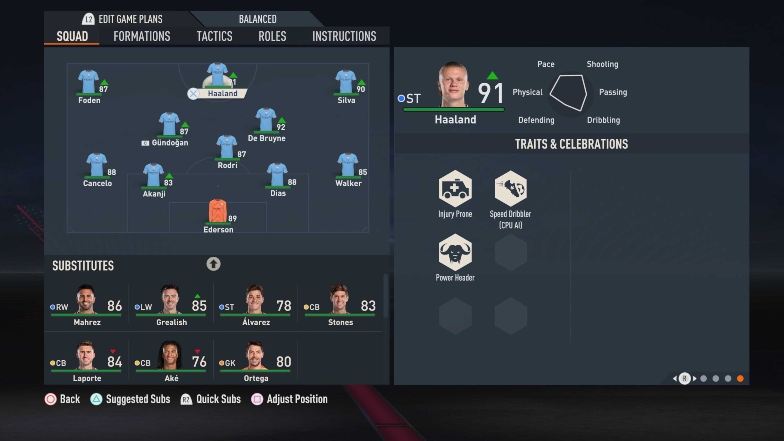 Pep Guardiola is one of the most innovative football managers around. When he was in Barcelona, his famous tiki-taka tactic was admired around the world, even though it was not the first time that a manager had tried to implement the system.

The success that he achieved with the tactic, and the manner in which the Barcelona team went about their business, made him into the global phenomenon that he is considered to be today.

Since moving to Manchester City, Pep has managed to instill his football values and beliefs into the team across all levels. City now has a well-recognized football ideology, and it has worked wonders for the club, especially in domestic competitions.

At the beginning of the 2022/23 season, Pep made a tweak to his system at the club. It was the same 4-3-3 formation, but the roles of the players in the formation had been adjusted. In this guide, we attempt to replicate Pep Guardiola’s Manchester City tactics for FIFA 23.

Now, this guide is obviously intended to emulate Manchester City’s tactics with the squad of players that they have. However, if you’re trying to replicate the same thing with a different team, it is possible if you can get the right types of players.

The first thing to note when building a squad for this tactic is that every player on the pitch must have a good level of technical ability.

The only positions where you may be able to get away with less technical ability are the two center-back spots – even the goalkeeper should have a strong kicking attribute. This is because every player in the system is involved in build-up play to a reasonably high degree, bar the center-backs.

Going into more specifics, you can also get away with less pacey fullbacks here. Pace is king in FIFA, but the way the fullbacks play in this system moves them into the middle of the park more often than the flanks, so technical ability outweighs pace in terms of importance. They must be good at passing.

Your defensive midfielder should be a tough tackler with enough of a physical presence that he does not look out of place dropping in between the center-backs. He should also be technically sound enough to bring the ball out from the back, and spread passes across the pitch when the opportunity arises.

The left-central midfielder should have great ball control to maneuver in tight spaces, good passing ability to combine with the left-back and left-winger, and good stamina to arrive late into the box for crosses as often as possible.

The right-central midfielder taking on the De Bruyne role should be the most complete player on the team. He should be able to carry the ball forward, cross, pass, and shoot. Again, pace is not so important in these central midfield positions, and you can also get away with average defensive ability.

On the flanks, you want two wingers with very good pace and dribbling ability. Ideally, you want players with at least 4 stars for the weaker foot, but you can probably get away with 3 stars too.

Your striker should have the basics – pace, shooting, and physical presence. After the center-backs, this position is another where passing ability can be sacrificed for better stats in the aforementioned areas.

The starting formation is a simple 4-3-3. It is the default formation for Manchester City in the game, but in reality, it changes a lot during the run of play. In attacking phases, for instance, it will often be 2-3-5. I’ll explain how as you read further.

The settings here affect how the team adjusts and responds depending on the phase of play that you’re in.

Considering the fact that the full-backs will spend a lot of time in the middle of the back, especially within their own half, you don’t want to stretch the width of the defensive zones.

A width of 50 is okay to defend narrowly but not to the point where there is a ton of space out wide for the opponent to take advantage of.

Manchester City always plays with a high line regardless of the formation, so a depth of 75 replicates that high line. It does expose you to runs behind the defense, so you need to play the offside trap to perfection when the need arises.

In the attacking phases of play, City plays a patient build-up game, steadily passing the ball back and forth across the pitch until an opening presents itself in the opponent’s defense.

This slow, possession-based build-up play works because it drags players out of position and increases the chances of concentration lapses. Again, you’re not actively trying to stretch play until the space opens up, so an average level of width is okay.

When the ball is in the final third, City players often overload the 18-yard area. Players such as Gundogan (LCM), the wingers, and the striker regularly make runs into the box, so you need to have a few bodies in there.

5 is a good number in that regard, as it leaves you with a couple of options just outside the box and enough players left at the back to ward off counter-attack situations.

Gundogan was announced as the new club captain after Fernandinho’s departure at the end of the 2021/22 season. Kevin De Bruyne is in charge of most set-piece duties, and Haaland is the top pick for penalties.

If you’re not actually playing with Manchester City, you can just choose the players with the highest relevant stats for each set-piece.

These personalized player instructions are reflections of how each player plays in Manchester City’s system. Even if you don’t have the exact types of players that City has with whatever team you’re using, applying these individual instructions will still go some way in helping you replicate Pep’s system/

Ederson’s ball-playing abilities are more talked about than his actual goalkeeping skills, so it is only natural to have the sweeper instructions here.

The two center-backs have the most orthodox instructions of any player in the team, so you can leave them as is.

I mentioned earlier how the fullbacks come into the central areas to form a three-man midfield alongside the defensive midfielder.

To replicate this, set the run type of both players to “inverted” and leave the other instructions as is.

The “Rodri role” requires a defensive midfielder that can drop into a back three but also bring the ball out of the defensive third, depending on the phase of play that the team is in.

Set this player to act as a deep-lying playmaker that covers central areas when defending. Defensive behavior should be set to “cut passing lanes”, and attacking support should be set to “drop between defenders”.

The LCM’s instructions are slightly different from the RCM’s. Set this player to get forward when the team is attacking and also get into the box for crosses.

Positioning freedom should be set to “Drift wide” to maximize combination play with the left-back and left-winger the way Gundogan does.

The RCM in this system is the “De Bruyne role”. Set the player to get forward during attacks and stay on the edge of the box for crosses (long shot ability is useful here for second balls, lay-offs, or cut-backs).

Like the LCM, he should also drift wide to the right flank. KDB takes a lot of crosses from there, and this is where good crossing ability and vision comes in.

Both wingers have the same instructions here. They provide width for the team by staying wide. This helps you to relieve pressure after drawing the opponent’s defenders into narrow areas as you can easily switch the ball to the other flank where space must have opened up.

On the ball, however, these wingers must be dynamic, so get them to support crosses by “getting into the box for crosses”. Support runs should remain balanced so they can provide short passing options or make runs in behind depending on where defensive pressure is coming from.

Defensive support should also remain balanced so they occasionally help out in defense if the front press fails, but they’re also regularly available if you need to start a counterattack.

Like Haaland at City, the striker’s main job in this system is to put the ball into the back of the net. He might not get too many touches over the course of the game, and you can even go stretches without involving him in build-up play.

Possessing the basic striker attributes mentioned previously is the most important thing for his role. Get him to stay central and stay forward, so he is the target of most crosses, through balls, and the occasional hopeful long ball or clearance from the back.

Replicating Pep’s system at City with this guide is pretty straightforward if you’re using the team. All you have to do is copy the exact instructions as advised.

You might need to make minor adjustments if you’re using a team that has players with a different set of skills. However, even in those cases, try to stick to the script as much as possible if you hope to achieve a similar brand of football. 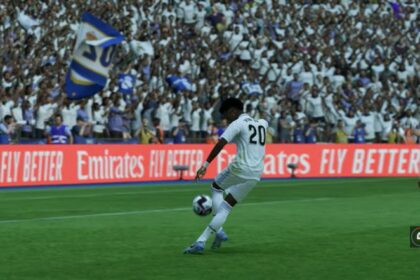 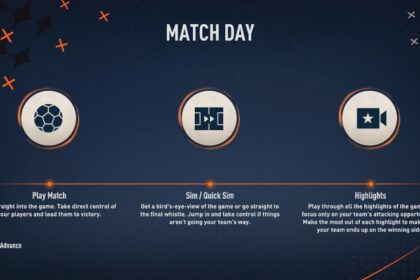 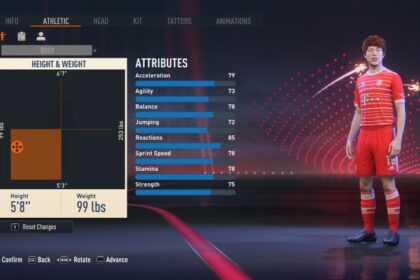 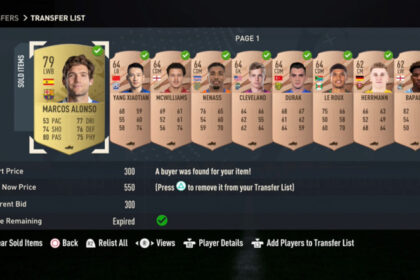 Here’s Everything to Do First in FIFA 23 Ultimate Team 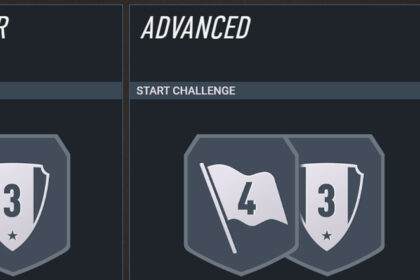 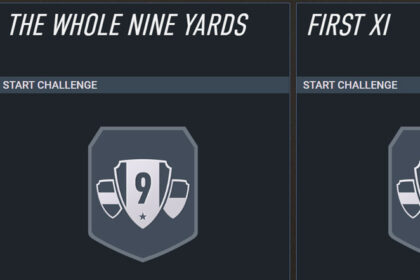