The BAR assault rifle is a great weapon if you know how to put it to use. It has one of the highest damage per shot firepowers in the entire game – perhaps only 2nd to the best sniper rifle in Vanguard.

With the typical BAR, which you get by default, it will take a few shots to eliminate an enemy but with the build that I’m about to show you, it takes just two shots, making that 20 round mag not a bad choice after all. That’s the level of performance you get with some sniper rifles out there, with the only exception that this gun fires bullet after bullet at a much faster rate.

This is in my opinion the best BAR loadout in Call of Duty: Vanguard. It has ridiculously high TTK (time-to-kill) and though it fires like a semi-auto, it’s absolutely brilliant.

Let me show you what I’ve come up with.

The below attachments make this BAR loadout particularly great at medium to long-range engagements.

That, however, doesn’t mean that you can’t take on opponents from up close on chaotic maps like Das Haus. In fact, the hip-fire accuracy of this gun point-blank isn’t bad at all. Either way, here are the attachments that you should start to make use of right now.

Below, you can find out why I picked each of the attachments that you’ve just seen for this BAR loadout as well as some alternatives in case you wish to make slight amends to the overall class.

To make the BAR lethal in long-range, especially since it requires more than a single shot to take down an enemy, heavily emphasizing on recoil control is of utmost importance. For that reason, I went with the “G28 Compensator” muzzle.

The benefit is +1 recoil control while there are no downsides to the weapon at all. It’s also the first muzzle you unlock for this weapon, which is perfect.

Potential Alternative: If you’re looking to become a silent assassin and you already know how to do finishing moves in Call of Duty: Vanguard, you should most definitely go for the “MX Silencer”. That attachment will boost your weapon accuracy by a single point while suppressing the sound that your weapon gives off when you fire a shot.

The only downside to that is that the weapon’s ADS will be reduced by one point or just 4.1%, which is nothing in the grand scheme of things.

The “CGC 30XL” barrel is crucial to this BAR loadout. It will dramatically improve your recoil control and accuracy, reduce scope sway and gun bob, as well as improve your flinch resistance. On the downside, you’ll see a reduction in ADS, movement speed, and sprint to fire speed.

However, since you aren’t going to be looking at rushing through every door and fighting off two players at a time when using these BAR attachments, you’ll be just fine.

Potential Alternative: In case you do want to go in rushing through every door and challenge everyone in your way from up-close, then it’s probably better to go for the “Cooper 21″ Scythe”. That attachment will increase your bullet velocity, damage range, and ADS at the expense of some recoil control.

I’ve used the “Slate Reflector” attachment for pretty much every weapon that I’ve built so far – including my STG-44 loadout and the Combat Shotgun class. It’s simple, precise, and doesn’t come with any cons.

Potential Alternative: Another popular recommendation for this BAR build is the “Nydar Model 47”, which is very similar to the “Slate Reflector” with the only difference being that the optic is circular as opposed to rectangular.

The stock is another crucial attachment that will pretty much determine the type of BAR build you’re going to get. As this build focuses more on accuracy and medium to long-range engagements, my stock of choice is the “Chariot WR”.

With that, you’ll see an increase in aiming stability, recoil control, accuracy, and flinch resistance by four, three, three, and two points respectively.

On the downside, you’ll see a decrease in movement speed and ADS by three and one points respectively.

Potential Alternative: If you want to be more dominant up close as opposed to at range, then go for the “CGC Wire”. That attachment will boost your sprint to fire speed and movement speed by two and one points accordingly. The downside is a reduction in initial accuracy and recoil by one point.

For underbarrel, my attachment of choice is the “Carver Foregrip”. That will increase my recoil control and hip-fire accuracy by two and one points respectively. Though you unlock this attachment first amongst the rest, the only downside is that you’ll see a decrease in ADS by 1 point or 4.1%.

Potential Alternative: If you want to keep your ADS or even improve it, then it’s a better idea to go for the “Mark VI Skeletal”. Do note that you’ll need to reach weapon level 65 before you get access to that.

Arguably the most important attachment is this BAR loadout, the “.50 BMG 20 Round Mags” is of utmost importance as you will see a boost in your bullet velocity and range, bullet penetration, and damage by two, one, and one points respectively.

That’s the attachment that will make the BAR take down an enemy with just two shots. This obvious advantage will come at the expense of a reduction in recoil control and accuracy, ADS, fire rate, and movement speed by -5, -2, -2, and -1 points respectively.

Potential Alternative: If you like the idea of that but don’t think 20 rounds in a mag is enough, you should go for the attachment below, the “.50 BMG 30 Round Mag”, which is the same as the above, but with 30 rounds in the mag.

The downside to that one is an even greater decrease in movement speed and ADS by one point for each one.

For ammo type, I went for the “Lengthened” as that increases the weapon’s bullet velocity by whole three points and though there are no downsides, the only negative to that is that you’ll have to wait until weapon level 56 to unlock it.

Potential Alternative: If you’re yet to reach that, I would go for “Subsonic” if you went for the “MX Silencer” muzzle to make yourself stealthier as that will make your rounds quieter and not show you on the enemy minimap when you fire shots.

This makes it great for keeping cover while taking enemies down from distance.

The rear grip is another vital attachment that will solidify this weapon’s recoil control and accuracy – making it that much better for long-range combat. My attachment of choice here is the “Pine Tar Grip”.

That will boost your weapon’s recoil control and hip-fire accuracy by two and one points respectively at the expense of ADS, which will be reduced by a single point.

Potential Alternative: Again, if you want to keep your ADS up and make the weapon more useful in close-range, go “Fabric Grip” as that will give you a boost in aim down sight speed, sprint to fire speed, and hip fire recoil recovery at the expense of some accuracy.

As the BAR can also be used as an automatic weapon (by simply holding the fire button), it’s integral to make every shot count and be in full control of your accuracy and recoil during sustained fire. This is exactly what the “Hardscope” proficiency can help you with.

Potential Alternative: If you play on smaller maps, going for the “Sleight of Hand” will help you a ton as that will speed the reload speed of your weapon.

As you’ll be equipped with just four mags that hold 20 rounds each at the beginning of each play, it’s a good idea to maximize the overall starting ammunition that you get. The best way to do that is by going for the “Fully Loaded” kit.

That way, if you like to play safe and take down enemies from distance, you’ll have plenty of ammo going until you need to pop that supply box down.

Potential Alternative: If you don’t plan on playing safe and from distance, it would be a good idea for you to go for the “On-Hand” kit as your BAR will have less downside after use.

The BAR isn’t your typical weapon where you can just rush into a building and take down 2-3 opponents. Rather, it’s a much more sophisticated weapon that is the perfect killing machine when it comes to medium to long-range engagements.

It’s particularly useful if you play search and destroy or any other game mode for that matter on maps such as Oasis, Red Star, and Bocage. The ability to take down an enemy in just two bullets regardless of distance is very impressive, and I personally have had a lot of fun using this BAR build.

How to Bomb the Carriers in CoD: Vanguard

How to Take Down the Stuka in CoD: Vanguard 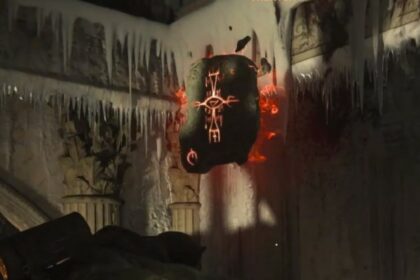 How to Get Runestones in Zombies on CoD Vanguard

How to Reach the Airfield in CoD: Vanguard