How to Get a Trident in Minecraft

Having superior weapons in Minecraft can improve the gameplay greatly.

In PvP, you’ll be able to better match opponents, and in singleplayer, you’ll survive for longer. Tridents are reliable tools for combat, especially in watery environments.

Additionally, there are many enchantments available for tridents in Minecraft; understanding what each can do and how valuable they are for particular contexts is vital. After finding a trident, you’ll be able to improve it by applying enchantments.

Depending on the context, a trident can benefit from specific enchantments that wouldn’t fit a distinct situation inside the game.

Therefore, you need to choose a game plan and then it’ll be easier to know what enchantments suit your trident better.

But first, let’s discuss how to get a trident in Minecraft.

The trident is the most versatile weapon in Minecraft. You can use it for melee battles and long-ranged combat.

The main traits that make a trident versatile are its excellent performance at melee attacks, delivering as much damage as high-tier swords, and its long-range usefulness.

You can throw a trident by holding the right button and aiming.

Concerning range, tridents can cover a reasonable distance and have a helpful projectile speed. In this sense, they’re valuable long and short-ranged alternatives, performing above-average on both combat types.

Even so, you might benefit from using tridents as melee weapons better. After launching a trident toward an enemy, you’ll need to retrieve it from the floor. So, you might become unarmed for a few seconds, which can be dangerous during a battle.

Using it for melee won’t present such obstacles.

In Minecraft, there is no way of crafting a trident. Therefore, the only method to get this item is through mob loots.

The only mob type capable of dropping a trident is the drowned, more specifically, naturally-generated ones. Still, even when spawning organically, drowned have a 25% chance of having a trident in their hands.

Although they have a chance of spawning with a trident, the chances of them dropping those after death are 8.5%. So, although finding a trident-wielding drowned is challenging enough, you’ll need to rely on good luck to loot the trident from them.

Fortunately, you can increase these chances by having the Looting enchantment on your sword. For every Looting level you have, the chances of getting a dropped trident from drowned increases by 1%.

There is a slight chance of the dropped trident being enchanted.

In PvP, you can get tridents through a different method: from players.

Tridents are throwable objects, which means they need to be picked up after being launched. In singleplayer, the player can’t pick up drowned-launched tridents. However, it’s possible to pick up a trident thrown by another player in multiplayer.

As we’ve seen, it’s only possible to acquire a trident by looting from the drowned in the single-player mode. Even so, killing those mobs does not guarantee that you’ll get the trident.

To increase your chances of getting the trident, you’ll have to find ways to access the drowned quickly. But, first, understand this creature’s biome, where you’ll find it more abundantly. It’s also vital to know the methods of farming these mobs.

The drowned appear in ocean biomes; more precisely, they naturally spawn in the depths, where light level equals zero. You’ll also find them on rivers and dripstone caves in the same light-level circumstances.

The main structure you’ll find the drowned, though, are underwater ruins.

Usually, ruins spawn on the ocean floor and generally contain destroyed homes and towers. Often, they’ll have a few glowing blocks, making them stand out and easier to spot.

Minecraft makes it possible to farm any mobs through simple or complex mechanisms, the drowned included.

A drowned farm needs to have a proper structure to harvest naturally spawned drowned to obtain tridents. It’s essential to be aware that these types of mobs don’t have a “spawner block” like zombies, spiders, etc.

There are various types of farm structures centered around harvesting naturally spawned drowned. Although some mob farms can work for most mob types, the Drowned operate differently and require distinct methods. Let’s see an example.

Find an ideal location to build the farm. In this case, it must be in the deep ocean’s biome; you’ll need to place it on the ocean floor.

Begin by crafting a 5×5 glass platform. Then, count two blocks above it and do a two-block high wall skirting the platform.

Now, make four adjacent nether portals above each wall line. Then, close the portal’s inner entrances with stone blocks and cover the structure’s roof. The building should keep its square-like shape, so place stones or any other building block you’re using on the corners.

It’s vital that you leave a “tunnel” in the structure’s center. You can close the entire roof after reaching the setting above.

Now, let’s return to the structure’s bottom; on the space between the glass platform and the stone walls, place fence gates. Next, put trapdoors connecting the fence gates.

Now, dry the structure’s interior with sponges. You can get inside the closed area by fast-swimming through the trapdoor. Press “ctrl” and swim right through.

After drying the whole space, place four turtle eggs in the platform’s middle. The drowned feel attracted to turtle eggs, so don’t get spooked out if you start hearing their gurgly sounds after placing the eggs.

Next, add three blocks on the upper part of the portal’s exteriors.

Then, count one block further and place three observers below. The observers must be facing the structure. Add stones adjacent to the observers; under the stones, place note blocks.

Now, put three pistons facing the portal, below the observers, and adjacent to the note blocks. You must do this process on all the portals.

Close the structure’s frame by putting three stone blocks on every upper corner, connecting the observers of every portal.

Finally, dry the space between the portals and the observers in front of them. The water inside the space must be flowing so that currents are coming from the sides and quiet waters sit in the middle. See below:

You can achieve this water formation by filling the space between the observers with any kind of building block and breaking them afterward.

Finish up by placing strings in front of the observers. Repeat the process on all portals.

Now, place three soul sand blocks on the lower glass platform in front of the three central glass blocks. You must set the soul sand to stay a “Y” level below the glass platform, so dig one block and place them.

Then, activate all portals with the flint and stone. Next, reach the structure’s roof and go up 115 blocks. So, the roof’s “Y” value + 115. Build a small platform after reaching the altitude point.

This will be your AFK area. So, while the mechanism is active, your character can stay in this “safe spot” without interrupting the chunk where the farm structure is located. To understand this concept better, check our chunk-related article.

Find any piece of land near your location, build a nether portal, activate it, and take note of the bottom obsidian block’s coordinates. After reaching the Nether, destroy the portal you’ve just come through.

You’ll need to divide the coordinates you wrote down by eight.

Do it with the “x” and “z” values only. The “y” value should not enter the equation. The resulting coordinate is where you’ll have to build the new portal. Get to it, make the portal, and hop in.

It’s vital that the Nether portal you’ll build stay on the exact coordinate values you get. So, take the “Targeted Block” coordinate for reference, which you’ll find on the right side of the F3 screen.

In the overworld, return to the structure and note the coordinates from any of its portals. Do it similarly to the last time by checking the bottom obsidian block. With these numbers in mind, go back to the Nether, divide the “X” and “Z” values by eight and reach the coordinate.

In this location, build the new portal; this will be the portal where the drowned will come through.

So the mechanism will work by luring the naturally spawned drowned with the turtle eggs, pushing them into the portals, and transporting them through.

Then, in the portal you’ve last built in the Nether, make a particular type of room to cage the drowned and kill them.

There is no other way of getting tridents than looting from players or the drowned. Still, there are different methods of ensuring that you’ll obtain a trident.

You’ll improve your chances of getting a trident with enchantments by enchanting your sword with the Looting trait. As aforementioned, you can increase the chances of dropping a trident from the drowned by 1% per Looting level.

Since the Looting enchantment can upgrade up to level three, you can increase your chances of dropping a trident from the drowned to 11.5%.

In a different situation, tridents can get lost pretty quickly; they’re throwables, which means that you might throw them somewhere impossible to reach. To ensure you’ll have the trident back regardless of where you throw it, enchant it with the Loyalty trait.

The Loyalty enchantment makes the trident automatically find the player after being thrown. Think of it as Mjölnir returning to Thor’s hands.

You can upgrade the Loyalty enchantment to level three. Each level upgrade makes the trident return to the wielder’s hand more quickly.

The only stance that Loyalty doesn’t work is if the player changes dimension after throwing the trident.

For example, if you throw the trident while in the Nether and hop in a portal to the overworld before the trident returns to your hands, it won’t find you.

After returning to the Nether, the trident will resume its path and get back to you, though.

How to Make Tinted Glass in Minecraft

Glass is an amazing addition to any build. It allows us...

Minecraft can be loads of fun to play with others. Shar... 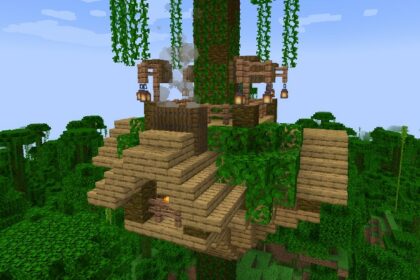 Having to build a house on the ground can certainly lea...

How to Get Better at Minecraft PVP

Playing Minecraft in single-player is a unique experien...

How to Turn on Coordinates in Minecraft Realms

Minecraft Realms are a good way to bring friends togeth...

The depth of detail in Minecraft is fascinating. Apart ...