How to Make a Jukebox in Minecraft

If you ever want to hear some different music than the default Minecraft soundtrack, then you certainly need a jukebox.

A jukebox is a functional block in Minecraft that can play the many random music discs you may find around the world in chests.

Most commonly you would have found a disc inside a chest in a woodland mansion, but also other places.

Making it is simple and it has many more uses than just playing music. In this article we will show you how to make the jukebox and what other uses you may have from it.

The jukebox recipe only requires one valuable and hard to find material and that is the singular diamond that you need to make it.

The wooden planks are rather easy to get in comparison.

You can use any wooden plank block you can harvest in the Overworld or even the Nether. Place the diamond in the center of the crafting table and surround it by the wood, like shown in the image below.

Now that you have made your jukebox you can place it anywhere in the world.

In order to use it you will, of course, need to have the actual discs that go inside it. These discs can be found in many places around the world as loot or even fished out.

Once you have a disc, approach your jukebox and right click on it with the disc to insert it.

The range of the music is 65 blocks in all directions surrounding the jukebox. That means the sound of the music travels quite far and for as long as the music plays.

Once a disc is completely finished it will be ejected from the jukebox. You will have to pick it up and reinsert it to play it again.

You can’t stack multiple discs inside the jukebox to make them play one after the other.

When the jukebox is playing you will also see mobs like parrots and allays react to the music. Both of these mobs can be seen dancing near the jukebox, but there is something else an allay may do, other than dancing. We will cover this later in the article.

Jukebox as a Redstone Component

Interestingly enough, the jukebox can be used as a rather unique redstone component.

While playing music the jukebox will give out a redstone signal. The strength of the signal completely depends on the type of disc that it is playing. Each disc has its own strength.

The way you will be able to use this signal is only if you place a redstone comparator directly behind the jukebox. Without it, the signal will not get transferred.

The two strongest redstone signals come from the “otherside” and “5” discs.

The most useful feature of a jukebox is not the music, but the ability to breed allays.

Allays are pretty rare mobs that can be found in the overworld. They are little helpers that help you pick dropped items, and the way you breed them is entirely unique compared to any other mob.

Sometimes looking at the same exact thing for a long ti...

How to Build a Tent in Minecraft

Sometimes building a whole house or base is just far to... 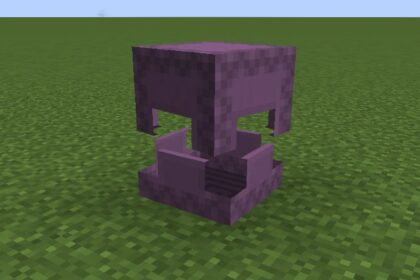 How to Make a Shulker Box in Minecraft

A shulker box is one of the best late game Minecraft it...

How to Keep Chunks Loaded in Minecraft

Various Minecraft players will have encountered the pro...

How to Make a Target Block in Minecraft

If you are savvy with a bow or crossbow, you should def...

Mekanism is an excellent mod for Minecraft players that...