The 11 Best Fighting Games on Switch

The Nintendo Switch is mainly known for its family-friendly games and famous Nintendo IPs. For that reason, it might be surprising to many gamers that this console has a significant number of Fighting Games.

Although Nintendo produces games that are not filled with graphic violence, it has accepted games such as Mortal Kombat in its platforms since the SNES.

Not only are there some great Fighting Games on the Switch, but some are also exclusive titles. You can’t play those on any other console, not even on PC.

If you are here, chances are you have a Switch and you are looking for a Fighting Game. So here is our list of the best Fighting Games on Nintendo Switch.

Due to the frequent gore, it is understandable if some players are surprised to see Mortal Kombat among Nintendo Switch fighting games.

Although this game was quite controversial for the change in gameplay that differentiates it from the franchise’s previous title, it is still considered one of the best fighting games on Switch or any other platform.

Mortal Kombat 11 is a polished, good-looking fighting game and one of the best-selling games ever in the genre.

If all that wasn’t enough, it has an extensive, well-written story mode and popular guest characters such as The Terminator, Rambo, and my all-time favorite, Spawn.

Mortal Kombat 11 is one of the few Triple-A fighting games out there, and, luckily, it’s on the Switch.

Skullgirls 2nd Encore is a hardcore fighting game with lots of actions, long combos, mix-ups, and a lot of heart.

The game has a very recognizable art style that reminds us of animations from the 60s mixed with manga. There are character designs that look very much like Anime from that era.

Each character has a lot of personality, a distinct visual identity, and unique gameplay, so the game rewards both character loyalty and match-up knowledge.

This game is an indie gem and a solid fighting game that rewards good fundamentals as well as good execution.

Have you ever wondered what would happen if you mixed Tekken and Pokémon? Not many people have. Thankfully, the ones who did had the power to make it happen.

Pokkén Tournament DX is something else. It is a traditional 3D fighting game, much like Tekken, and it is also somewhat of an arena fighter.

This version is pretty much the same game once released on the Wii U but with extra content. It has daily challenges, a ranked mode, and five new Pokémon.

Unlike most Pokémon games, it might be hard for a beginner to get into Pokkén Tournament DX, as that’s usually the case in this generally over-complicated genre. Because of that, not only can we say that this is a real fighting game, but also that it’s a really good one.

If you don’t like long combos and complicated execution, you might enjoy the high stakes of Samurai Shodown.

This game was always different. It has unsafe moves that are hard to land and can be severely punished. On the other hand, those who do hit those moves might be a couple of light attacks away from victory.

This high-risk, high-rewards gameplay is what makes Samurai Shodown so different from other games of the genre. You must be methodical in your approach, surprising your enemy with heavy attacks by predicting their pattern or baiting obvious heavy attacks so you can execute a parry.

Samurai Shodown counts with a great roster that has fan-favorite returning characters, charismatic new characters, and even some guest characters such as For Honor’s Warder, The Last Blade’s Hibiki, and Guilty Gear’s Baiken.

There is no other experience like Super Smash Bros. This franchise has been paying homage to video games since it first came out, but it has gone way beyond the Nintendo World.

This platform fighter franchise has popularized the sub-genre but has never gotten an actual rival. Unlike any other game, Super Smash Bros. Ultimate has a roster that is impossible to match. Once you start playing the game, it’s easy to understand why,

You can play Link, Zelda, Mario, Luigi, Mewtwo, Lucario, Kirby, Meta Knight, Ryu, Kazuya Mishima, Terry Bogard, Richter Belmont, Sora, Megaman, Sonic the Hedgehog, and so many others. Super Smash Bros. Ultimate has 89 playable characters that are memorable and dear to all those who grew up playing video games.

Blaz Blue is a complex fighting game with frenetic gameplay that has an exciting roster. There are all types of characters there, from witches to ice-controlling swordsmen. The game cannot get more anime than it already is.

If you do not get easily scared by long combos, complex mechanics, and fast gameplay, I’m sure you will love BlazBlue Central Fiction.

Garou: Mark of the Wolves

If going retro, there are few games that hold up well, and Garou is certainly one of them.

This is the last Fatal Fury — or Garou Densetsu in Japanese — that SNK gave us before abandoning the series. The characters of this franchise often show up in The King of Fighters, but it isn’t the same thing.

Garou was SNK’s response to Street Fighter 3. Meaning, it was a game made to look great and have a refined 1v1 gameplay with interesting combos and mechanics that were slightly more complex than what we were used to seeing back then.

They did deliver that with the Just Defend system and two super special attacks for each character.

On top of that, few fighting games have the same charisma and charm that Garou: Mark of the Wolves has. This game has beautiful pixels, charismatic characters, great animation, and an outstanding soundtrack on top of really fun and solid gameplay.

The King of Fighters 98

Some retro fighting games still have thousands of players. The King of Fighters has a fragmented fanbase because the game used to be out every year, and therefore it was pretty easy for people to prefer one release over the other.

Fortunately, most people who play The King of Fighters agree that the KOF98 version is one of the best out there. It was an impressive roster of 60 characters, including many fan favorites and returning characters.

Besides, this KOF also allows players to choose versions of characters, allowing them to play as older versions of their favorite fighters, granting them access to different moves.

Everyone who has finally learned the fundamentals of a fighting game has arrived at the conclusion that these games are fun, but going through that beginner’s phase is often way too hard on beginners.

Classic Fighting Games are complex and difficult, the entry barrier is quite intimidating, and there isn’t much material or content for beginners.

Enters Fantasy Strike, a fighting game designed to be your first experience in Fighting Games. The game is a very simplified version of classic fighting games. There are no motion inputs, the life bars are easy to read, and there are no low attacks or overhead blows.

Fantasy Strike was carefully designed to make beginners understand what is so fun about this genre, and it is a game that newcomers and veterans can enjoy.

This list would not be about the best Fighting Games on Switch without one of the best Anime Fighters ever made.

Dragon Ball FighterZ is a crazy game. It seems easy on the surface, making it easy for you to mash the attack button to get auto combos and specials, but those who play it regularly will quickly show you how much depth this game has.

Team composition plays a big part in playing Dragon Ball FighterZ at a higher level. Not only that, but also not spamming auto-combos, match-up knowledge, and using optimized combo routes that take advantage of your team’s assists.

There is so much to learn, master, and adapt to in this game that once you go beyond its surface, it really is a complex Anime Fighter with a lot of action and hard to react mix-ups that the subgenre is known for.

Street Fighter 30th Anniversary Collection is not just an excellent fighting game for Switch; it’s a collection with some of the best fighting games ever made under a single title.

If you like Street Fighter, you know better than anyone if you want the whole collection up to Street Fighter 3: 3d Strike. If you are not, getting this game is a great way to get started. 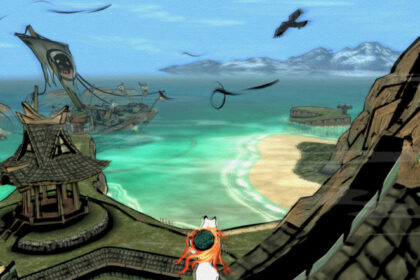 The 15 Best Adventure Games on Switch

The 24 Best JRPGs on the Nintendo Switch