Most players love Stranded Deep for its replay value. The ability to customize your experience at the beginning of the game allows you to determine whether you want to calmly explore the world or face difficult challenges, meaning you can play it over and over.

If you enjoy classic survival gameplay elements like exploration, resource management, and character care, it’s easy to see why you like Stranded Deep. There are many other great survival games that share the same gameplay features.

Here are 8 games like Stranded Deep that we’re sure you’ll enjoy, ranging from some of the best survival games on Steam, to dark, open-world RPG titles with a survival theme.

The Long Dark is a survival game set in an open-world environment. Just like Stranded Deep, it gives you the option to choose how you’ll experience the game. You have two choices – survival mode and story mode.

If you’re up for a true challenge, you should pick survival mode. The Long Dark is a demanding survival game that takes into account caloric intake, fatigue, body temperature, along with several environmental factors. To survive, you need to find whatever resources you can and utilize them to combat these factors.

To keep your hunger levels low, you can hunt wildlife for food. Some animals may present a threat to you, including bears and wolves.

The game features a full day and night cycle, which is also a notable feature in Stranded Deep. If you’re not careful, your character can die from frostbite, dysentery, hypothermia, and hostile wildlife. There’s a lot to manage and keep an eye on here.

The story mode is more of an adventure game, but it still has some survival elements. This mode doesn’t have a permadeath feature so it won’t matter much if you die in the game. The story follows a pilot who crashed in the Canadian wilderness following a geomagnetic storm.

The map in The Long Dark has twelve regions. Not all are accessible in the story mode.

The Forest is a survival horror game set in a heavily forested peninsula. The events in the game take place after the main character survives a plane crash, which seems to be a common theme in games like Stranded Deep.

With non-linear gameplay and an open-world environment, players are left to decide how they’ll survive in this scary world.

There are no specific missions that you’ll need to complete here. You only have one goal, and that’s to find your son Timmy who was on the plane with you when it crashed. The game has two different endings that you’ll experience based on your decisions toward the end.

What gives The Forest its creepy elements is that the peninsula you’re stuck on is occupied by cannibalistic mutants. They will always be scary when you encounter them but sometimes they won’t be hostile.

The night and day cycle in this game is a great addition to other survival elements. It’s notable that cannibalistic mutants that live on the peninsula will be more hostile when it’s night.

There are building gameplay elements in The Forest. You can construct a shelter and make traps. There are multiple types of structures you can build, including cabins, shelters, and treehouses. You will need supplies like logs, rocks, and sticks to build a structure.

Subnautica is a survival game set in an open-world environment, and it’s one of the best picks on this list for fans of games like Stranded Deep.

The story is set in the distant future. You take control of a character named Ryley Robinson. The spaceship you were on crashes on an alien planet known as 4546B and you’re left to navigate this unfamiliar environment. The planet is an alien ocean world filled with dangerous predators, and it also holds a great mystery that you’ll have to solve.

You will spend most of your time in Subnautica underwater, and there are only two islands that you can explore.

The game features a day and night cycle that has an effect on visibility. There are four different modes to choose from when you start the game. Survival mode is the classic experience you’d expect from a game that’s similar to Stranded Deep.

The freedom mode is a great option if you want the same mechanics featured in survival mode but without thirst and hunger. Choosing the hardcore mode unlocks the permadeath feature and is only for experienced players. Creative mode is perfect in case you don’t want to gather resources and worry about statistics or mapping.

Subnautica has building elements, too. You are able to build underwater habitats you can visit when it’s time to replenish your oxygen supplies and store resources.

It’s hard to find a game with a more realistic take on survival than Green Hell. There are many things that can go wrong in the game, even when you think everything is fine. This game features both single-player and co-op multiplayer modes.

The story follows an anthropologist named Jake Higgins. You control Jake as he navigates through the Amazon rainforest. Your ultimate goal is to find your wife Mia who has been missing for some time after going to make first contact with a tribe known as Yabahuca.

This game is definitely not for the faint of heart. It has strong psychological aspects that emulate what it must feel like to be alone in extreme conditions. Your fight for survival will be full of unexpected events, and very simple actions can have catastrophic results.

Let’s say that you’re tired and want to sleep for a while. Laying down for a quick rest might lead to you waking up with worms burrowing in your skin. You might die due to infected wounds after a successful fight, or eat something that results in stomach parasites.

You will need to be mindful of your actions in Green Hell. It’s a truly gritty and demanding survival game that fans of games like Stranded Deep will get a kick out of.

Ark: Survival Evolved is one of the most popular survival games to come out in recent years.

This game features both single-player and multiplayer modes. If you’re playing online, you have the freedom to form tribes with other players. Whether you decide to play by yourself or not, your experience will be the same in the beginning.

For the first few hours in the game, you’ll mostly be collecting resources. Once you finish that, you will be ready to learn more about the strange island you’re on, known as Ark. What makes Ark so mysterious is that it’s filled with prehistoric and mythical creatures.

You will run into dinosaurs, phoenixes, griffins, golems, and many other creatures. There are almost 200 creatures in Ark: Survival Evolved. Surviving the island is no easy task and requires you to engage in a number of activities.

Players have to monitor their hunger and thirst. The food available on the island varies in nutritional properties. It’s good to load up on supplies but know that having too much in your inventory will make you slow. Weather can affect everything from sanity to energy levels.

Games like Ark are truly immersive and engaging. If you liked Stranded Deep, this game should be at the top of your to-play list.

This game has a very interesting and unique concept that is appreciated by many survival fans around the world. It’s one of the best picks for fans of games like Stranded Deep, due to its unique survival mechanics and immsersive gameplay.

In this game, you control a player that is on a small raft with a hook that they can use to catch items. Some of the things you can catch early on include crates, wood, plastic, and barrels. You can use all of these items to make your raft bigger.

Players have the freedom to leave the raft if they want to grab something from the water and can reach it only by swimming. However, leaving the raft may lead to vicious attacks from sharks. It can also pull you away from your raft as a result of the continuous ocean current.

The story behind Raft is quite scary when you take a few moments to think about it.

It takes place in the near future when polar ice caps have melted due to climate change, causing unprecedented floods. There is hardly any dry land where people can settle and nearly everyone who survived the floods is now living on rafts. You control a character who sets out to find habitable land.

Medieval Dynasty is a survival game set in the Middle Ages. It combines gameplay elements of four different genres, including survival, strategy, role-playing, and simulation, and it’s ideal if you want a game like Stranded Deep with a new theme.

Players control a character named Racamir, who flees from his settlement after his parents die in a war. You start the game as an inexperienced and poor adventurer in search of a better life. There is a massive, open world to explore in this game.

The game features realistic weather conditions, a day and night cycle, as well as four seasons.

There is a storyline in Medieval Dynasty but the game encourages players to explore the world and learn stuff on their own. Some of the most important skills you’ll need to develop to survive include cultivation of land, farming, and hunting.

The simulation gameplay elements allow you to construct various buildings as well as craft weapons and tools. You will develop your character as you progress the game and interact with many NPCs too. Strategy gameplay elements encourage players to grow a village, manage citizens, and produce goods to consume or trade.

Empyrion – Galactic Survival is a sandbox adventure and survival game with a heavy focus on exploration.

There isn’t a detailed story in the game, which is completely acceptable for releases in the survival genre. Your character has crashed on an alien planet with a hostile environment and you’ll have to figure out how to survive with the resources at your disposal.

You start with a limited supply of common resources and need to find rarer materials to make crucial equipment. When you start the game, you’ll get several small missions that will explain the mechanics of the game.

Some of the standard survival gameplay elements like fatigue and thirst are absent from Empyrion. However, you will need to control your hunger levels.

The crafting system is where the game really shines. It’s so much fun to craft a variety of items that you’ll use later on. Apart from crafting, you can also build various objects, including spaceships, bases, and ground vehicles.

You get experience points when you mine for resources, craft items, and kill hostile creatures. When you level up you will have perk points to spend to learn or upgrade skills.

You can play Empyrion either by yourself or with other players. If you choose the multiplayer mode, you’ll be able to create and join factions. If you’re in a faction, only members of it will be able to access your spaceships and bases. 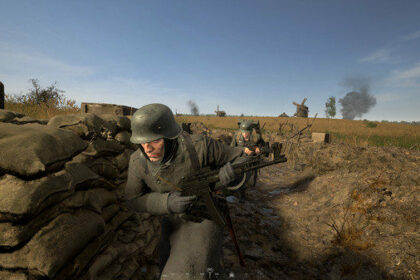