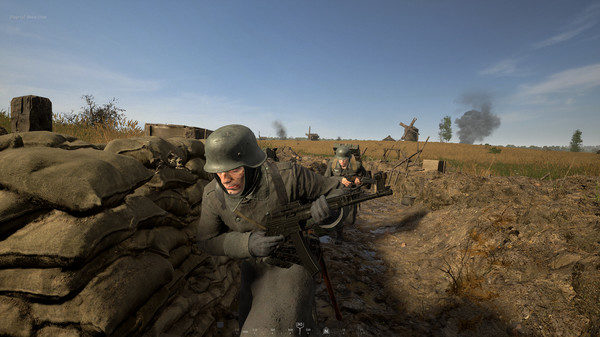 Call of Duty is a global icon and one of the most-played game franchises ever. It stands out with crisp graphics, engaging gunplay, and enough strategy to keep things interesting.

But if you’re a gamer who’s been around for a while now, you may be starting to get a little bored of Call of Duty. Don’t get us wrong, Warzone did a lot to revitalize the series. But it was released in 2020 and you’ve probably already played hundreds of games on it.

That’s why we’ve put together our list of the top games like Call of Duty. It’s full of 10 standout titles that are the perfect way to take what you love about the COD franchise and enjoy it in a fresh new format.

So let’s not delay this any longer. Here are 10 games like Call of Duty we think you’ll love.

Apex Legends is one of the top-played (and streamed) battle royale games in existence. Like Call of Duty, it features skill-based gunplay with a hefty dose of weapon customization options to personalize your loadout.

What makes Apex Legends different is its inclusion of unique characters – each of which has its own special ability. This adds a layer of strategy and depth that not even Warzone can match.

For example, the character Ash has an ability that opens a one-way portal that teams can use to travel across the map instantly. Whereas Bangalore has a rolling thunder ultimate ability, which lets him drop an airstrike across an area.

There are a total of 21 characters in Apex Legends as of the time of writing, so there’s a ton of room to switch up your gameplay and make things interesting. It’s why Apex is at the top of our list for games like COD.

(Check out our article on how to dominate in Apex).

Part of what makes Call of Duty great is the number of different game modes there are to enjoy. You can play Warzone for a battle royale, single-player for a fun story mode, or team-based competitive matches for that classic online multiplayer experience.

If you’re someone who enjoys the in-depth strategy of team-based Call of Duty, then Rainbow 6 Siege should be the perfect game for you. It’s a team-based FPS game that emphasizes close-quarters combat and lots and lots of strategy.

The game features a roster of highly-trained special forces operators, who each have their own abilities for contributing to their team’s success. The game also has a thriving competitive scene. So if you’re interested in really getting serious about a game, then this could be the one for you.

Counter-Strike: Global Offensive is a game that needs no introduction. It was launched 19 years ago and is still one of the most widely-played shooters globally.

CSGO is similar to Tom Clancy’s Rainbow Six Siege in that both prioritize team-based game modes in which you die once and then have to wait until the next round to respawn.

The difference between the two is that CSGO doesn’t have operators with their own special abilities. So if you were interested in Rainbow Six but don’t want to have to learn how to use and fight against a ton of different special abilities, this game could be the best one for you.

Halo is another iconic franchise that recently came out with a title that brought something new to the table. Infinite brings back everything that you love about the original franchise, including a compelling story campaign and plenty of thrilling online multiplayer modes to enjoy with friends.

But the game also has a battle royale mode now, which it calls Last Spartan Standing. This takes the classic Halo multiplayer experience and kicks it up a notch with shrinking zones and bonus weapon upgrades based on kill count.

The only thing about Last Spartan Standing is that it’s technically a mini-battle royale since it only accommodates a maximum of 12 players as of the time of writing. So it may not scratch your BR itch entirely.

But, still, Halo Infinite has basically every game mode that COD offers. So whether you like a single-player story, team-based multiplayer, or a BR, this one could be a good fit.

Hunt: Showdown is a game that slipped under many people’s radars. But that’s a shame because it’s one of the most unique entrances into the BR category that we’ve seen in a while.

In Hunt: Showdown, it’s 1895 and you play the role of a Hunter who’s been tasked with eliminating savage beats from the Louisiana Bayou. You can do this on your own or in teams of two and three.

But your team isn’t the only one that’s trying to do this. You’ll be pitted against several other teams who will be competing with you for a valuable bounty. This results in some ruthless BR-style battles that stand out thanks to the PVE aspects of the game.

You’ll get to play with friends, enjoy lots of period-inspired weapons, and explore an engrossing BR map that no other game in this category can match. Features like these make Hunt: Showdown a BR title that stands out.

Zombies is a game mode that has always helped Call of Duty stand out from the other titles in its genre. If that’s one aspect of COD that you love, then trying out Left 4 Dead 2 is a must.

This blood-soaked co-operative horror game takes you through five campaigns across the Deep South. You can play online with friends, dive into the fun story, or just have a blast by yourself killing zombies in every way imaginable – including with guns, chainsaws, baseball bats, and even frying pans.

You won’t find the gun-based PVP that you love about Call of Duty here. But Left 4 Dead 2 does have stats, rankings, and award systems that help to keep things fresh by bringing a bit of competition to the table.

Chaos. Pure unadulterated chaos. That’s the only word you can use to describe Hell Let Loose.

The game puts you right in the middle of some of the most iconic battles in human history. You’ll play in largescale 50 vs. 50 multiplayer battles across huge maps and will be able to choose from 14 playable roles.

Hell Let Loose is perhaps the best video game encapsulation of the chaos that war truly is. It features a unique blend of strategizing with a large team and gunplay, which helps it stand out from most of the other titles in this genre.

To make things even crazier, this game features proximity voice chat. This lets you communicate directly with up to 49 other players at once. What could go wrong?

If you’re looking for a fun way to take part in huge battles and get a little crazy, then this one is for you.

Arma 3 is an older game, but it’s one that absolutely still deserves your attention – especially if you’ve never tried it before.

The game was designed to provide a true combat experience in a massive military sandbox. It features more than 20 vehicles, 40 weapons, and almost unlimited opportunities to create compelling content with your friends.

You can play Arma 3 as a single person by following the story of Ben Kerry. Or you can hop online and play in massive multiplayer lobbies in tons of different scenarios. The map is super impressive. It features a huge amount of territory with lots of diversity, such as rolling hills, large cities, and dense forests.

There are also a ton of powerful modding tools available for this title, so if you get into it, you’ll have a lot of freedom to build your ideal war story.

Overwatch tends to get a lot of criticism nowadays (and some of it, deservedly so). But it’s still one of the most unique titles out there and a game like Call of Duty, which could be right up your alley.

What makes Overwatch different is its large roster of heroes – each of which has their own special abilities. This makes the game almost endlessly replayable, because every time you switch characters, it’s like you’re playing an entirely new title.

For example, if you’re looking for the classic shoot-em-up Call of Duty experience, you could play as Soldier 76 or Cole Cassidy. Or if you want to be a tank who can hook people across the map and pull them closer a-la Scorpion in Mortal Kombat, then play Roadhog.

The game pits two teams of five or six against one another and has them fight to capture objectives, push carts, or keep control over a point. There’s a ton of depth to this game and high-level competitive play to enjoy and aspire to, which makes it a good fit for gamers of all interests and goals.

Finally, we’re rounding out our list with PUBG: Battlegrounds. It was one of the first huge titles in the battle royale category and it’s still one of the most widely-played games globally.

If you’re looking for a game like Warzone, then this one could be your best option. It’s very similar in that it focuses on realistic gunplay, lots of different loadout choices, and plenty of engaging squad-based gameplay.

It’s also one of the only games on this list that you can play on your phone, so if you’re a mobile gamer, this could be the one to check out.